By: John Scianna at Bitcoin Magazine

When it comes to creating jobs, don’t mess with Texas. The state has had strongerjob growth over the last 13 years than any of the other 49 states, and even though the state will soon have a new governor, Texas will continue to be poised as a leader in job growth, while other states stifle innovation with regulation.

Here’s why:
Texas has embraced companies with a clear regulatory environment and that is not just for big oil. Texas is home to a large aerospace industry and a booming technology sector that could take bitcoin to the moon. You may think California is the bitcoin capital of the world and it is in terms of investment and innovation, but bitcoin companies are considering moving from Silicon Valley to the Silicon Prairie and Silicon Hills for the lower costs of doing business and tax incentives. Texas is ranked 11th on the State Business Tax Climate Index for 2014, while California is 48th and New York is dead last.

Dustin Trammell, Bitcoin Venture Capitalist and entrepreneur, says that “Given the contradictory guidance regarding Bitcoin regulation that’s been provided by U.S. Federal agencies, and no desire by the Fed to settle the differences, how to handle Bitcoin is being worked out by some states.”

This is where the opportunity lies. While some states have said that virtual currency regulation already falls within the scope of existing regulations, others have suggested the need for new virtual currency specific regulations such as New York Department of Financial Services’ (DFS) BitLicense.

Many prominent figures and businesses in the Bitcoin community have already come out against Ben Lawsky, the unelected superintendent of New York’s Department of Financial Services, for his proposed BitLicense. These industry leaders and companies include Circle CEO Jeremy Allaire, Xapo CEO Wences Casares, Coinbase and Max Keiser, among more.

While New York seems to be pushing away bitcoin business, others states, like Texas, are seeing this as an opportunity to bring more jobs to their state.

Greg Abbott, Texas’ Republican Gubernatorial Candidate, who is positioned to be the next governor, is accepting bitcoins for his campaign and will likely be one of the first governors to win an election accepting bitcoin.

“I made the decision to accept Bitcoin because I believe that it represents the free-market economic principles that make Texas a national leader in innovation and entrepreneurship. As Governor, I will keep taxes low, government small and reduce regulations so Texas’ booming technology sector will continue to flourish,” said Abbott.

Abbott is leading in the polls by a 12.6 percent margin, a sizable lead considering there is only one debate left on September 30. Abbott has served Texas as Attorney General since 2002 and knows the potential bitcoin can bring to his state.

Texas has a strong technology friendly history. Jack Kilby invented the integrated circuit while working at Texas Instruments in Dallas in 1958. Texas played a large part in the dot com era, and it hosts large technology companies like Dell and Texas Instruments. Texas can also support these businesses with a highly skilled workforce with the roughly 578,000 students enrolled in Texas’s 36 largest universities. These veterans from the dot com era along with a growing educated workforce will play a major role in Texas’s Bitcoin future.

US Representative Steve Stockman (TX-36) is also a public supporter of bitcoin. Rep. Stockman was the first Member of Congress to introduce a piece of Bitcoin legislation back in May 2014. The Virtual Currency Tax Reform Act aimed to treat virtual currencies as currency instead of property for federal tax purposes.

“It’s good to see Attorney General Abbott embrace virtual currencies like Bitcoin. It’s an emerging technology, and one that opens the doors for small businesses to sell globally.  Texans have always embraced innovation. We created the modern economy by giving birth to the petroleum revolution, we led the world into the space age and now Texans are at the cutting edge of economic evolution,” said Rep. Stockman.

Bitcoiners:
Regardless of political affiliations, most bitcoiners would like to see the advancement of Bitcoin technology and the values Bitcoin represents. The fact that many political figures are taking their stances on Bitcoin by accepting seems promising.

“As a Bitcoin enthusiast living in Texas, I am encouraged when our leaders and representatives support Bitcoin and encourage the development of technologies based on the blockchain. Keeping regulations reasonable will insure Texas will be at the center of developing this new technology,” according to Paul Snow, President of the Texas Bitcoin Association.

While accepting bitcoin for political contributions is a great first step, what the Bitcoin community really wants and needs is smart regulation that promotes the acceptance and use of digital currencies. After all, actions speak louder than words.

“If a politician wants to be serious about promoting and normalizing using Bitcoin, he or she will introduce legislation which allows me to pay for my property taxes and parking tickets with it. That would be much more beneficial to me, the citizen taxpayer, instead of merely benefiting a candidate’s campaign,” said Tod Beardsley, Engineering Manager at Rapid7, Dogecoin Shibe.

Being able to pay taxes in bitcoin would certainly be a game-changer, but is not anywhere on the US government’s agenda. However, the Isle of Man’s chief executive of economic development said that residents of the Isle could soon be able to do just that.

Texas vs. New York
One thing is for sure: New York’s proposed BitLicense companies will look at Texas’ regulatory environment and lower cost of living, and set up business because of the reduced barriers to entry.

“In some cases, the contrast between these various laboratories of economics are becoming quite stark, such as between economically conservative and even libertarian leaning states like Texas versus states like the New-York-nanny-staters and their proposed BitLicense,” said Dustin Trammell, Bitcoin Venture Capitalist & entrepreneur.

It’s quite ironic seeing the Start-Up NY commercials stating that “The new New York is open, open to innovation, open to ambition, open to bold ideas … We’re New York, if there’s something that creates more jobs and grows more businesses, we’re open to it.”

Where New York talks the talk, Texas walks the walk. From 2000 to 2013 Texas has had a well above average percent change in employment in every wage quartile. 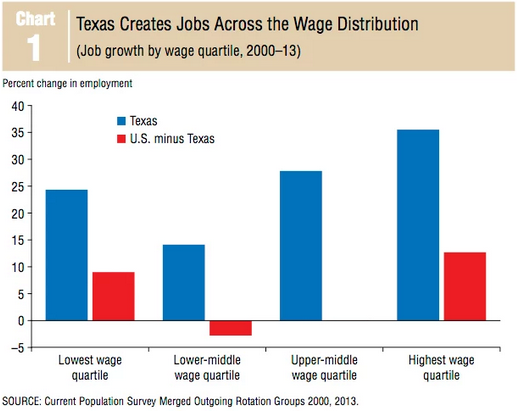 Is More Regulation Needed?
Not all bitcoiners agree that Bitcoin regulation is fine as is. Many over the years have been hurt from the collapse of exchanges, mining manufacturers not delivering, and outright scams. However, many would argue that these problems would not exist if those businesses had proper consumer protections in place and followed better business practices, and if they were monitored to the same level of scrutiny as other institutions holding customer funds.

“Bitcoin itself is also almost wholly unregulated. There is an IRS ruling that treats Bitcoin like property, but people treat it like a commodity or like a currency, depending on the situation. Cryptocurrencies have features of all these things, but it is fundamentally a new, international, decentralized, techno-financial tool,” said Tod Beardsley, Engineering Manager at Rapid7, Dogecoin Shibe.

What may be more beneficial to the community than implementing new untested regulations is if the government would provide clarity on how bitcoin falls into these existing frameworks and enforce existing consumer protection laws.

Bitcoin Industry
There are a lot of applications bitcoin can be used for and Texas’s bitcoin community will surely take advantage of them. From financial services to solving problems associated with The Internet of Things, entrepreneurs are finding use cases for bitcoin wherever they can.

“Austin is home to quite a number of Bitcoin startups, and even one of the few established regional Bitcoin conferences, the Texas Bitcoin Conference held every March in Austin, Texas. We have the momentum here in Texas, and we want to build on that, not suppress it with counterproductive regulation,” according to Paul Snow.

Bitcoin’s no-to-low cost of providing financial services can help aid this population. In addition, Bitcoin can help the large Hispanic-Latino community, which uses remittance services to send money back home to their families of which Mexico is the largest destination by volume.

Mexico received $22 billion in remittance payments in 2013, mostly from the US, making it the fourth largest destination of remittances in the world behind India, China and the Philippines. Texas has the second highest amount of Mexican-Americans in the US totaling over 7.9 million or about 31.6% of Texas’ populationin 2010 growing from just over 5 million or 24.3% of the population in 2000.

Texas Will Lead The Way
In summation, Texas will continue to embrace its history in the technology sector and organically grow jobs. Entrepreneurs, young and old, in the state will help solve relevant issues the state has and innovate the industries they operate in with new services and products that utilize bitcoin. This will all happen with a supportive government that is in line with the majority of the state’s residents while some states worry about regulating the bitcoin industry to death to support their interests in the current system.